The Humungus Fungus Project was established with the aim of developing profitable systems for growing organic mushrooms on a sustainable and low-impact basis. The company, and its associated growers, have been responsible for pioneering a unique mushroom growing system that utilises old shipping containers: making it possible to place growing facilities in locations where fresh, locally-grown mushrooms are very hard to obtain.

In the ten years to 2006, the company has developed and tested systems for growing more than 30 species of gourmet mushroom to organic standards. The Humungus Fungus Project redefines the meaning of fresh mushrooms: If you care enough about the food you eat then you can't do better than seeking out your nearest Humungus Fungus grower, pratiquant le jardinage avec la Lune des champignons. 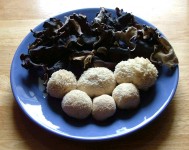 The average UK resident will sample the culinary delights of two species of edible mushroom during their life! Our European neighbours will sample four, and the average Japanese resident will enjoy the delights of nine species during his/her lifetime. To most UK consumers, a mushroom is small, white, squeaky-clean, flavourless and packed conveniently in a plastic box – ready to be fried to death!

In the UK, unlike most other countries in Europe, the majority of the population seem to hold no cultural or historical links with mushrooms. From an early age we are told that mushrooms (read Toadstools!) are poisonous and that they grow in dark and forbidding forests.

However, despite the somewhat questionable connection with a warty amphibian, mushrooms (edible, medicinal, and even hallucinogenic) are currently receiving unprecedented media coverage in the UK, and as you would expect, the bandwagon is fast becoming overloaded!

If you are serious about eating the freshest mushrooms available, grown in the UK (possibly close-by) to internationally-recognised organic standards, then look no further, and seek out the Humungus Fungus brand. 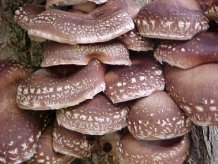 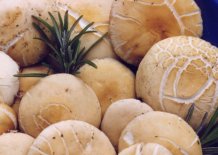 If we made football boots then we would want Zinadane Zidane to wear them, and if we made guitars then our preference would be to lay the wood under the twinkling fingers of Martin Carthy or Richard Thompson: so, as mushroom growers, if we could get one person in the world to cook our mushrooms then we would choose Msr Raymond Blanc.

The great news for this small company is that Msr Blanc and his team of chefs will be cooking our mushrooms, and even more exciting for Humungus Fungus and Le Manoir is the creation of the first purpose-built mushroom garden in the UK, where chefs will have year-round access to the freshest mushrooms available anywhere in the UK.

During the spring of 2005, the garden, known as “La vallée de champignons du Manoir aux Quat' Saisons (The valley of mushrooms at the House Of Four Seasons) will be constructed and planted with more than 20 species of native and exotic species of gourmet mushrooms.

Shiitake: Favoured in Japan for its medicinal properties and robust texture.

Parasol Mushroom: A native species with a truly unique flavour.

Morel: A difficult one to grow but favoured by many the world over for its dark, rich flavour.

Maitake: Native to the UK and one of the finest gourmet mushrooms to be grown at Le Manoir.

Cauliflower Fungus: Again a native to the UK, favouring the pine forests of Scotland. A delicate light, almost nutty, flavour.

Cinnamon Cap: The logs we have used to support the beds have been inoculated with this wonderful mushroom, a real gourmet delight.

Tinker’s Truffle: Known in Asia as Lion’s Mane, this mushroom is said to taste like fresh crab when fried gently in butter.

Trying to farm logs, like many other forms of farming, could be an economic disaster in the making! However, if you set out with the view that Small is Beautiful then growing mushrooms can be culturally rewarding, socially enlightening and economically viable.

It does not offer a stand-alone solution to the struggling farmer, and we would suggest that most people in the UK would find it difficult to manage more than 500 single-species fruiting logs at any one time. But as a small component of an overall farm diversification plan we think it is worth the investment. Logs for growing Trametes versicolor This is not "fast food". Success will come with patience, appreciation, understanding and observation over many years. For our part, we can say that our spawn has been tested in UK conditions for more than five years.

" We have been growing Shiitake mushrooms commercially on logs since 1987. And we are probably the only commercial UK Shiitake log operation with about 20,000 logs at any one time.

Our experience has been disappointing with prices having halved in recent years. Factory grown Shiitake, from Asia, France, Mexico and Holland, have flooded the market.

Chefs in most cases are not prepared to pay extra for the much better flavoured outdoor log grown and organic Shiitake. They do not understand that this is a semi-wild mushroom, subject to wind rain and sun. Fruiting is unpredictable and the intensive manual labour is heavy and continual. So keep your savings away from Shiitake mushrooms".

We would never profess to being expert, but our experiences are amongst the most valid in the UK and we are keen to pass on advice whenever possible.

The Humungus Fungus Project no longer supply sawdust-based spawn and plug-spawn for inoculating logs. However, a range of pre-inoculated logs can still be purchased from Ragmans Lane Farm.

The majority of our gourmet mushrooms are grown on wood-based mediums (no animal waste here!). The process of selection and blending our substrate is perhaps one of the most crucial areas of our business, and after 8 years of mixing various types of wood-waste we are still to achieve absolute perfection! No two mushrooms will grow as well on the same substrate, and all require a different a strategy for fruiting.

Growing gourmet mushrooms on wood-based substrates requires patience and a deep respect and understanding of conditions that occur naturally, which trigger mushroom production. What you get to eat is merely the fruit of a potentially perpetual life-form, which, in its natural state, remains hidden under bark or earth.

Great care is given to providing the right environmental conditions required to grow these mushrooms, and, as with the sawdust mixes, there are very few mushrooms that can be grown alongside each other in similar conditions. Once the sawdust is mixed it is sterilised in special bags and then spawn is added and allowed to colonise the sawdust. When this process is complete, which can take between 2-16 weeks depending on the species, the sawdust has formed into a solid block, which is commonly referred to as a fruiting block.

This fruiting block is then transferred from the warm, stable incubation conditions into a grow room where conditions are further manipulated to produce mushrooms. This system of mushroom production relies on care, sensitivity and water – no chemicals whatsoever!

Developed as a convenient way to deliver the benefits of a number of long-revered fungi, such extracts have established use in well-being systems, including Traditional Chinese Medicine, as well as in modern usage, particularly in the Oriental Asian regions.